Bodegas Juan Carlos Sancha is a winery located in Rioja Alta, one of the best-known wine-producing regions of Spain. This winery, operated in the town of Baños de Río Tobía (Rioja Alta) by Juan Carlos Sancha, a professor of enology at the University of La Rioja, is situated on five hectares of land along the border of D.O.Ca. Rioja, and in the coldest zone of this wine denomination. 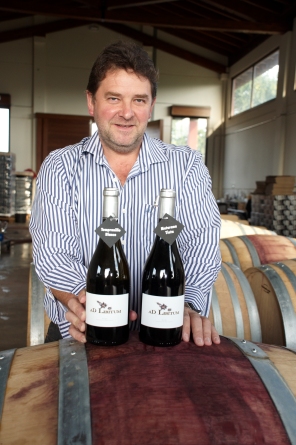 This cooler location, in Baños de Río Tobía (Rioja Alta) in the Najerilla Valley, contributes to the high quality of their wines. Juan Carlos Sancha’s winery also has vines of minority varieties such as Tempranillo Blanco, Maturana Tinta, Maturana Blanca, varieties that he and his university colleague Fernando Martinez de Toda discovered, rescued from extinction, and developed.  Professor Sancha then went on to found the first Rioja winery employing these minority varieties in commercialized wines.

Professor Sancha chose the name ‘Ad Libitum’ for its meaning: “Free to do what you wish.”

Good wines come from good grapes.  The wines of Bodegas Juan Carlos Sancha are the result of the vineyards’ cool, high location; their very densely planting (5,000 vines per hectare); and the poor calcareous soils of these vineyards.  These factors make the vines “suffer,” producing fewer grapes with higher juice concentration—qualities which contribute importantly to the Bodega’s complex, high-quality wines. Tempranillo Blanco and Maturana Tinta grapes grow at 565 meters (….feet) altitude, and the old Garnacha vines from which Peña El Gato wine comes, grow at 650 meters (…. feet) altitude.  Also contributing to the quality of the grapes are the location of the vineyards on south-facing hillsides, enabling both good solar radiation and air flow and reducing vine disease susceptibility.

Indeed, because of all these contributing factors, these three fine wines from Bodegas Juan Carlos Sancha—Ad Libitum Maturana Tinta, Ad Libitum Tempranillo Blanco, and Peña El Gato—are sure to please the most discriminating palate.

Ad Libitum means ‘free to do as you wish.’